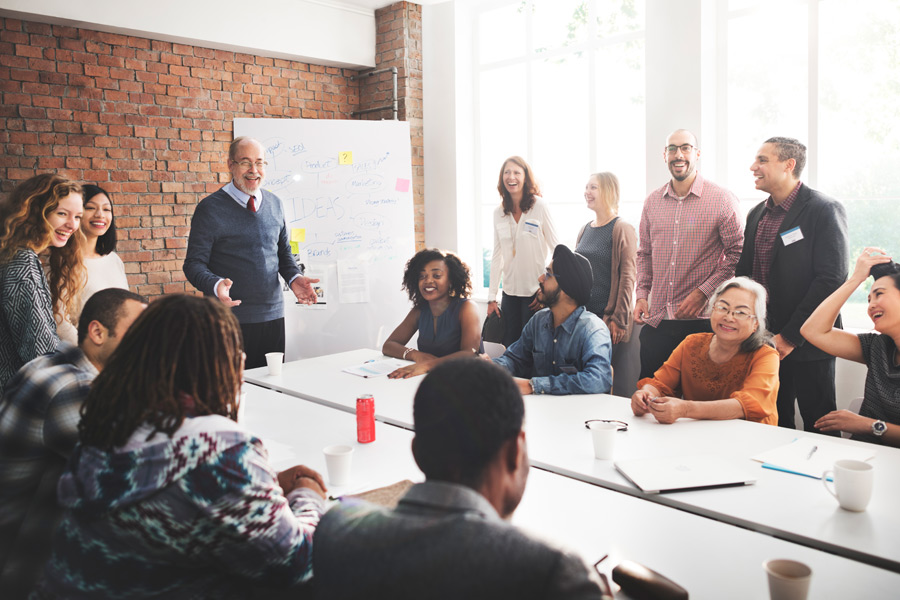 In the following article featured in the ‘Leadership For a Better Future’ series in EFMD’s Global Focus magazine, Stuart Neilson writes about leadership behaviours and values that will ensure future success.

But what does respectful leadership look like now as our leaders face the impact of Covid-19? The author has identified ways to help leaders guide their teams through the current challenge:

Leaders of the future who underestimate the importance of ‘respect’ as a central element of their culture do so at their peril. Leadership culture will be the biggest single influence on organisation performance and success. Without appreciation and respect for other people leaders will struggle to be effective.

Business leaders today face pressure for higher profits and short-term results. They are experiencing this while their employees expect work to be an extension of life and are concerned about personal wellbeing.

Every generation has a slightly different expectation of what they demand from work. Millennials expect to have access to the latest communication systems and also want to see a clear purpose for their role and how it contributes to the overall objectives of the company.

Modern-day leadership must adapt to, and be relevant to, people in all societies and business communities around the world. The key successful leadership is to recognise those changes, creating an environment and culture where people can perform at their very best, knowing they are respected and valued. A good leader will understand they have the capacity to have a profound impact on the quality of people’s lives and take this responsibility seriously.

Unfortunately, CEO’s in many large companies around the globe still employ dictatorial, command-and-control leadership tactics that are often accompanied by lack of respect for their employees.

This approach may be enough to deliver against basic performance targets but will very often fail to optimise an organisation’s full business potential. In such an environment targets may well be achieved, but rarely in full measure and the attrition rate of talent is high.

A disrespectful leadership style often results in a blame culture where people are scared to take responsibility. Highly talented people fail to be creative or take decisions for fear of the consequences. They prefer to keep their ideas to themselves rather than risk being undermined by the boss.

And consequently, they end up feeling that their contribution is not valued. They never seem to be asked their opinion by their manager and feel they have been left out of the loop on important decisions.

The biggest toxic assumption made by disrespectful leaders is that showing care and empathy for your people is a sign of weakness and is somehow  “soft”. In reality it is a strength and will help release the full potential of people and the organisation.

The ability to empathise is a also a sign of respect for people’s feelings and emotions and will help build trust . Without trustit is impossible to become a great leader.

But building trust can be a slow process, established through believing in people’s capability, being honest, # acting with integrity, asking for employee inputs to problems, recognising performance and accepting  failures .

In a Harvard Business Review survey of 20,000 employees around the world no other leadership behaviour had a bigger impact on engagement and commitment than  “respect”. Every person has the innate right to be respected and to be treated with dignity. They have the right to work for a leader who understands that they have a life outside work and who avoids invading their personal time where possible.

So why does this type of disrespectful behaviour happen? Organisations of all shapes and sizes are under immense pressure to be innovative, to increase brand dominance or hit ever-increasing sales and profit targets.

When performance wanes, leaders feel pressure and consequentially they often make quick, ill-thought through decisions without consideration for their people. These decisions are also driven by leaders with high ego and low empathy.

This type of leader is often highly intelligent and will often rise through the ranks by influencing and manipulating those who can help them achieve their goals. Hosever when they arrive at the top of the company their lack of empathy can become highly destructive to the entire organisation.

Working in a disrespectful and toxic company will often create some of the clear neahvive signs noted above.

To counter these behaviours, it’s important to tackle the source of disrespect as quickly as possible; it must not be left unaddressed. But it should be handled in a respectful way to set an example. The perpetrator should not be confronted in public but their behaviour should be pointed out to them in a one-to-one meeting. This is also an opportunity to agree what “respectful” behaviours actually are.

Having determined that trust and respect are key to good leadership we should examine the importance of authenticity. In the context of good leadership, being authentic means being true to your values and behaviours in a consistent manner. Great leaders show consistent behaviours and they need to demonstrate their values every single day. Eventually those around you will start to understand and trust you more.

Being authentic and acting according to your values is not always easy, it takes courage and conviction, especially when everyone around you is acting differently and more senior people are pressurising you in a certain direction.

There are many pressures daily,especially in large, politically driven organisations, where your values and authenticity will be continually tested. Being true to your values may be challenging to the point where you may even need to consider leaving an organisation that does not share the same values as you.

All leaders have their own set of values but how do you determine your values and what type of values will deliver high performance?  “Values”” in this context are a set of principles or standard of behaviours that you believe are important when leading people.

When establishing your own values think long and hard about what is important to you and how you would like to be treated by others. Try to establish a list of at least five values you feel very strongly about. More can be added later but these will act as a good starting point .

Values don’t have to be expressed in a single word. You bring them to life by creating short sentences such as “everybody should know their purpose”;  ”treat people as you expect to be treated”;”‘ always seek to understand before judging”’. When you have your list of values try openly sharing them with your friends, family and colleagues and invite feedback. You will soon see if you act and live according to them.

If you have a new team, sharing your values should be one of the first things you do. Talking about this early will help your team trust you and also explain why you behave as you do.

It is important to know that values will develop over time based on new experiences and insights. And it is most important that they are genuinely your values and not a list you’ve found somewhere else and adopted. Being authentic is key.

As an example of living my values I remember a time when I was only six months into my tenure as managing director when our largest customer, which accounted for 20% of our revenue, announced unexpectedly that it was delisting us. We were only one month into our new financial year so budgets could not be changed.

There was no alternative customer we could immediately turn to that would compensate for the loss of business.  Naturally, I feared for my own job so early in my tenure but more importantly I feared the impact this loss of revenue would have on our people and the potential redundancies that would inevitably come if we could not find a solution.

It was clear to me that I alone could not resolve this problem. It had to be a team effort. My job was to be open and honest with the team but at the same time instil the confidence and trust they needed to have in me to lead them through a process that offered us the best outcomes.

We discussed the challenge. I invited people’s thoughts on how to resolve the situation. I listened, I took account of what they thought and we agreed we’d have to either lose people through redundancy or ask all our employees to accept no salary increases during a period when we sought commercial ways of resolving the revenue shortfall. Having personally addressed every department face to face to share the options, all employees agreed to accept a salary cap.

The commitment I gave the entire company was that the management team would do everything within their power to find new business and recover the lost revenue but we needed their support and commitment. We embarked on a strategy to revisit our customer base and found new opportunities to deliver results that had not been identified in budget planning six months earlier. We managed to recovered the gap and eventually achieved our annual budget on the very last day of the financial year. Without respecting our employees and gaining their trust this remarkable turnaround would not have been possible.

Successful leaders must offer hope to employees and customers. They need the ability to paint verbal pictures of what success looks and feels like. They are passionate about their beliefs and are able to communicate honestly and effectively. Motivating people is essentialbut only when the motivation is based on reality, sincerity and authenticity.

People want to believe in their leader. They want to feel they are an important part of the journey we are all on. In the modern and future business world, high performance is more likely to be driven by putting people and respect at the centre of strategy and culture.

Failure to listen to the needs of employees, embrace diversity and respect people will ultimately result in poor performance. Employees will disengage; talented people will vote with their feet; and the quality of human lives will be affected .