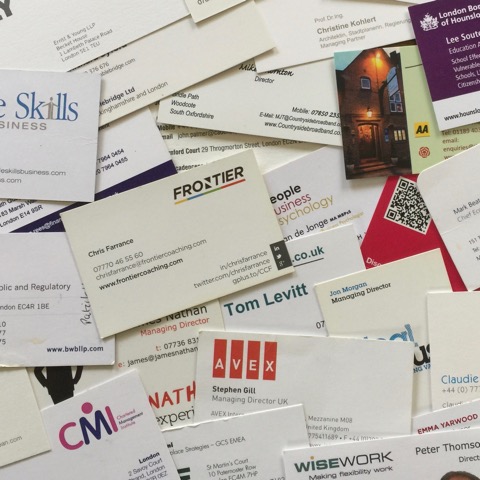 There’s something odd about jobs these days … we’ve gone all fancy full of frills and furbelows. The rot began when some genius managed to turn good old, sensible, sane Personnel, into that two-word misnomer Human Resources. The profession never recovered, spawning even worse bastardisations that culminated in heads of knowledge, chief people officers and the like. Twenty years later HR is still fretting it doesn’t get to sit in the boardroom and so spends it time plotting organizational overthrow. This to be achieved by forcing emasculated job-titles onto those toiling up the ladder of success.

As we’ve creaked corporately along the corridors of power, we’ve seen the rise and fall of corporate social responsibility, now we are at the beginning of a new chapter in “musical chairs” job titles: Sustainability. In fact few jobs are left that say what people do. Even Sales that simple, proud bastion has been elbowed aside by the hordes of Customer Experience operatives.
All the research tells us that in the future, jobs will be done by robots (the only jobs left, it is predicted by the doomsayers) will be those “lucky” people that give them their 20,000 hour service). But never fear, HR have come to the rescue, and given us a string of new job titles that are long on words, and somewhat puzzling in their meaning. What do these people do all day?

I’ve just spent two days at a conference in Brussels – capital of the Eurocrats – and am pleased to report that titular, ambiguity is alive and well. We may not have a clue what he or she does between nine and five, but, by God, we can make sure you are impressed right out of your socks, by the sheer audacity of the job titles on parade. There was a Professor, Chair Social Business Guidance Unit, a Director, Quality Accreditation and Benchmarking, closely followed by a Chair on Leadership and Democratic Governance (note that they all have capitals in their titles) Elsewhere we stumbled across a Senior Philanthropy Advisor and a Managing Director, Redefining Value and Education paired with a Senior Network Manager, Waste to Resource Innovation Network.

By their titles I have no idea what these people actually do, just stunned that they are seemingly happy to proffer their business card and actually repeat their job titles as they shake hands. The man with the biggest title was Chief of Staff Innovation and Strategy & Global Head of Group Sustainability (presumably the ampersand had been inserted to save on ink!).

Then I met a man who said he was a Lecturer. Threw me for a moment, my goodness couldn’t be very important could he? I actually know what a Lecturer is. If he’s going to survive, he needs to get creative and add another word or two (strategy and leadership always a winner), and this year’s new word: SUSTAINABIITY.

In this brave new world of work clarity is frowned on and obfuscation rules. Working on the principle that, if they don’t know what you do, they can’t remove or reassign you, job titles are set to take on yet more Darwinians tones. Survival of the smartest? No, survival of those with the most obscure job.

Many years ago, a colleague confided I me how it as possible to “hide” in an organization for several years, dodging the bean-counters trying to prune the organization chart. In the 21 st Century obscure jobs would seem to offer their own version of corporate camouflage. All it takes is to not feel ashamed or embarrassed by the title on your business card….. Maybe just don’t tell your children what you did in the organisational career wars.